Editor's note: This article was originally published in 2021. It has been updated to include new context and completed project photography.

In recent years, an increasing number of women with low-risk pregnancies have opted to use birth centers rather than hospitals. They are drawn to the personalized attention, home-like settings, and support for natural and unmedicated birth options the centers provide. Birth centers also offer a promising way to level the playing field for low-income women and women of color. As The New York Times that the project has been reported, birth centers can be of particular benefit for Black women, who face disproportionately high maternal and infant mortality rates on a national scale.

I was born in Washington, D.C., a place that counts among its many historic distinctions having become, over a half century ago, the country’s first predominantly Black major city. Since its inception, the District has been a posterchild for some of the most painful contradictions surrounding race in the United States. This was the first major city to elect a Black mayor; the backdrop for the most iconic moment of Martin Luther King Jr.’s career; a place where “Black Lives Matter” is now emblazoned in yellow on 16th Street. At the same time, food deserts persist — places where a dearth of transit and healthy food options intersect with the presence of poverty — making up about 11% of the District’s total area, nearly all of which lie in predominantly Black neighborhoods.

One shudders at the thought of another term: “maternity desert.” Yet following the permanent closing of two obstetrics wards in 2017, Southeast Washington, D.C. carries this descriptor as well. The nation’s capital is now identified as the “most dangerous place to give birth in the U.S. for Black women,” with a maternal mortality rate more than twice the national average.

Dangerous, and costly to boot. In the U.S., the average out-of-pocket cost for maternity care is around $4,500. Contrast this with Finland, often identified as the best place to give birth, where the expected bill for a normal hospital delivery is around a few hundred dollars. And that comes with a noticeably elevated standard of care: maternal mortality rates are low, water births are standard offerings, and midwives facilitate most births.

In response, advocates in the U.S. are making sharpened demands for birth equity, the assurance of conditions of optimal births for all people with a willingness to address racial and social inequities in a sustained effort.

I spoke with Ebony Marcelle, director of Midwifery at the Community of Hope Family Health and Birth Center and a board member of the American Association of Birth Centers, to gain a better understanding of the challenge at hand. Since 2011, Community of Hope has operated the District’s only freestanding birth center, which moved into its new and expanded location in 2022. Community of Hope addresses many of the social determinants of health that impact mothers and babies, providing community health services regardless of one’s ability to pay, as well as housing and psychosocial support for the whole family.

Marcelle was quick to highlight the international disparities that put the issue into such sharp relief: “In other countries, it’s normal to have this option. You have a choice between the hospital, the home, and the birth center.” Not so in the U.S., and especially not if you are facing financial insecurity. Of the more than 350 birth centers in this country, only around 10 accept Medicaid, of which Community of Hope is one. An even starker fact: of Federally Qualified Health Centers in the country with birth centers, Community of Hope is one of only five.

It’s not just birth centers themselves that are woefully rare here. Their philosophies and practices are underutilized, too. Only around 8% of U.S. births are attended by midwives (rates are closer to 50% in other developed nations), and the country’s rate of cesarean sections is 32% — 22 points higher than the World Health Organization’s estimation of the ideal rate. To Marcelle, the role of the midwife is amplified in the context of underserved communities. “It’s what I feel like individuals who are distrustful really need in their care. It provides continuity. It’s relationship based. And it makes people feel like they are in a partnership with the care they are receiving […] When I tell you we know our patients, we know our patients.”

Whereas the postpartum period is often neglected in more mainstream care routes, Community of Hope gives it close attention. “The recovery is more than just those first eight weeks,” Marcelle reminds us. “Postpartum care should really mean the whole first year.”

In the early stages the process, Community of Hope’s prenatal care creates opportunities to educate expecting mothers about the options at their disposal. How an organization communicates about its services can be just as important as the services it provides. The topic calls to mind Mary’s Center for Maternal & Child Care, another project Gensler designed, which focuses on prenatal care for immigrant populations that may avoid seeking treatment out of fear. “Especially with prenatal care, there are often plenty of places to go,” Marcelle notes. “Access isn’t always the problem. We need to talk about why people aren’t going.”

Part of Community of Hope’s daily mission thus revolves around making people aware of their options. It’s a point of frustration for Marcelle: “We don’t use the center we have as much as we should. A major reason why comes down to a lack of awareness.” Last summer, with construction forthcoming, the Gensler team created a mural on the existing building to generate buzz and strengthen the connection with the local community. In the midst of the pandemic, it was one way to provide a warm “hello” to a neighborhood in need, the tiniest of baby steps.

The Family Health and Birth Center opened in early 2022 and it is my sincere hope that this project can advance a broader dialogue around birth equity — both in the capital and nationwide. As with so many of Washington, D.C.’s characteristic contradictions, the new center is inspiring and humbling all at once, a pointed reminder of how much work lies ahead of us.

I think Ebony Marcelle’s diagnosis is the correct one. Birth centers and midwifery should at least be options for everyone. To the extent we can tilt the scales in that direction, we will have helped to create a more equitable world from life’s earliest moments. 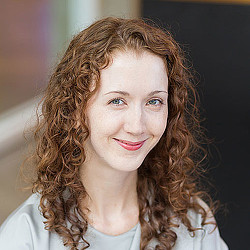 All Posts
Bonny Slater
Bonny is a design director for Gensler's Healthcare and Wellness practices. She has spent 15+ years creating inspiring environments to support health and wellness for diverse populations. With a background in design and environmental psychology, she brings a unique perspective and research-driven approach to crafting meaningful experiences by supporting physical, cognitive, emotional, and spiritual needs. Bonny is based in Washington, D.C. Contact her at .
Want more of Gensler’s design insights?
Sign up for our dialogue newsletters to get regular
updates sent directly to your inbox.
Follow us on Social Media