Why Human Experience Is Critical to Las Vegas’ Reinvention

Las Vegas finds itself in another period of adaption. Our community has grown from just about 5,000 people in 1920 to over 2.3 million in 2021 — an incredible rate of growth that has been fueled by massive waves of development, largely focused on the famous Strip or near Fremont Street — both gaming-centric environments. Surely, gaming and the lure of Las Vegas as an entertainment destination has long been the outward face of the city, fueling tens of millions of visitors each year, with a no-holds-barred mindset of “anything goes.” That was the city’s personality for decades, and while it may continue to be part of its sales pitch, there is something far more vital and far more serious at stake.

Las Vegas has often been a city built by chance, where large developments existed and thrived based on a “if you build it, they will come” philosophy. The city hasn’t thrived due to any historic masterplan or incredible diversity of industry — both of which have fueled many cities and ensured their survival in difficult economic cycles. Instead, Las Vegas has bet on its own reinvention as a method of combating external economic forces. In the last decade, as gaming revenues flattened, Las Vegas amplified its offerings, ultimately becoming a world-renowned destination for food, performing arts, and club scene.

We are now faced with an immediate crisis. In a post-COVID age, how will a city that thrived on getting such a wide variety of people together now survive with visitorship so impacted, conventions canceled, and our core economy severely compromised?

A smart move toward diversity

While many cities have developed based on the commerce of rivers, ports, or centers of our industrial past, Las Vegas has grown under a very narrow focus. And along that trajectory, the unbound desert landscape offered plenty of room for sprawl, increasing car dependency and often forming a stark disparity between locals and visitors.

But I’m going to bet that this particular pause in our city’s economic engine will generate a very real need, and a smart move toward diversity of our locale — not just in entertainment options and visitor-centric offerings, but a newfound interest and viability in housing typologies, public parks, and civic architecture. Design solutions that prioritize human experience offer the best opportunities to emerge stronger from this crisis. In that sense, Las Vegas has an opportunity to arise from this difficult moment as a more diverse, inclusive, and engaging urban environment for visitors and residents alike.

We have an incredible influx of people from all walks of life, of all ages, who have visited our city. Now, they are moving here. According to Gensler’s City Pulse Survey 2020, people are rethinking their relationships with cities, and roughly two-thirds of urban residents who want to relocate say that the pandemic health crisis has made them more likely to move. According to a report by LinkedIn, for every one person that moved out of Las Vegas in 2020, 1.32 people moved in. This new interest and broad influence of so many new locals will surely shape the city for decades to come.

The time for reinvention

We simply cannot reboot our economy and future using the same methods we have before. We must find a way to celebrate and revere the city’s colorful past without destroying it, while also expanding our wide-eyed “wild west” mindset of not questioning why we do certain things, as much as asking, why not? Sure, we can build more themed resorts, but should we?

We must also embrace bigger ideas about mobility, digital experience, connection to our dramatic landscape, conservation of energy, harvesting of energy, and creating density in our urban and suburban realms. There is no question that the blank slate Las Vegas has often relied on has become a bit more crowded over the last 25+ years. We are seeing typical low-scale single-family housing sprawl, but viable land is getting scarcer and developers are looking for other options to bring new products, new ideas, and diverse programs to future projects. The same formula that worked for decades is simply not as appealing as it once was, and in turn, we see a more tailored range of developments taking place across the entire valley, with walkable urban centers such as Downtown Summerlin or the revival of historic neighborhoods such as the Scotch 80s.

We can no longer recycle the same method of evolution. The notion of dreaming of a new lure, tearing down what once was, and banking on continued visitorship is likely gone. But all is not lost — not even close. In fact, this pause, and reflection, may offer us a critical, pivotal moment in our trajectory toward a more diverse economy and a far more self-sustaining community.

We need to amplify and invest in our community

What is this next evolution of our city to be if not for new spectacles for millions of visitors? The answer is locality. We need to amplify and invest in our community, and collectively push for community-focused developments that can also be appealing to visitors. For example, look to AREA 15, a dynamic, experience-driven environment that thrives on not being anything like the Strip or Fremont Street. It is unique, full of bombast and fun. And Las Vegas, if nothing else, is certainly a place for fun. But we can build on that maxim, and pair new architecture and developments with a combination of raw creativity and risk taking, alongside some sound planning and programming principles. This dynamic combination can be uniquely Las Vegas in its approach and delivery.

The future of our community will hinge on our ability to dream it all up again, to adapt, and to take a broader look at our growing diversity as a city and ensure our new developments can be inspired and engaged with the bright, colorful, and enthusiastic rebound Las Vegas is known for. Don’t call it a comeback; betting on Las Vegas is a risk worth taking. 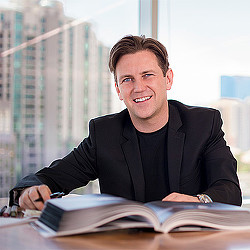 Full Bio All Posts
Brett Robillard
Brett is a studio director in Gensler’s Las Vegas office. An experienced project architect, he has more than 20 years of experience in a broad range of market sectors including entertainment, hospitality, commercial office buildings, sports facilities, and residential in the U.S. and Asia. Contact him at .