Editor’s Note: This blog post was written in partnership with Ty Breland, Executive Vice President and Chief Human Resources Officer for Marriott International, Inc., as part of a collaboration between Marriott and Gensler.

When Marriott International and Gensler joined forces over seven years ago to reimagine the company’s global headquarters, neither assumed the new facility would open on the heels of a global pandemic. We watched many projects go pencils down as this one pushed ahead. As a pillar of the hospitality industry for more than 95 years, Marriott approached the project convinced of design’s power to move the needle on the human experience. One way to do this was to develop a design strategy that fused hospitality and workplace.

The Marriott HQ — as recently profiled in The Wall Street Journal’s Open Office series — represents a bold answer to the questions everyone seems to be asking: After everything we’ve been through over the past few years, how do we create the workplace as a destination not an obligation: one that draws people back.

Among the notable conclusions of Gensler’s 2022 U.S. Workplace Survey, one stands out: The most effective workplaces — those that offer what workers describe as great experiences — provide access to a range of spaces, not just one. Eighty three percent of workers report that they would return to the office at least one additional day per week if the workplace offered a version of their ideal experience. For Marriott, that meant a workplace that captures the energy and ambiance of a vibrant hotel.


At the same time, the office’s role in supporting different work modes is evolving. We have long understood the workplace as a collaboration hub, and it will continue to serve this vital role. But the plurality of the survey’s respondents actually listed focusing on their work as the most important reason to come to the office.

All of this raises the question: What is the role of the workplace now and, as we embrace an increasingly digital, hybrid world, what will its role be in the future? Never has the workplace been asked to perform so highly in so many ways.

The dilemma Marriott faced in its prior building is a familiar one shared by companies across practically all industries. Set within an aging office park in the Maryland suburbs, Marriott’s former HQ was unable to provide its associates with meaningful connections to their surrounding neighborhood. With no access to mass transit, commuting by car was the only option. The building itself was horizontally stretched across six floors, and the architecture did little to promote internal connection among associates. Amenities needed to be rethought for a new generation of talent.

The challenge at hand was to attract and retain top multi-generational talent, but the pandemic broadened that challenge. As we witnessed a multi-year pause on some in-person work and its distressing consequences on urban downtowns, the project became an opportunity to recalibrate not only the role of the workplace in attracting people back to the office, but also the positive role a return to the office plays in communities.

Placing Marriott’s new headquarters in the bustling community of Bethesda in the Washington, D.C. metropolitan area unlocked countless opportunities. As a thriving urban center with mass transit stops near the nation’s capital and exceptional restaurants, retailers, residential options, and arts venues, Bethesda offers the kind of buzz and lifestyle that Marriott wants its associates to feel each day. As the newest resident of Bethesda’s downtown, Marriott can now become a more active participant in the city’s civic life.

Infusing hospitality and workplace in a vertically integrated campus.

The Marriott HQ is the first Gensler project in the post-pandemic United States to put forward this new recipe for bringing people back to the office. The impact of the hospitality-infused interiors can be felt on every level of the building. The headquarters is best understood as a vertically integrated campus where, through the motion of going from floor to floor, people have a multitude of ways to interact with one other. The notion is that amenities, if done right and woven throughout, can help make the workplace a destination rather than an obligation.

The campus features a 21-story office building and a 12-story flagship Marriott Bethesda Downtown at Marriott HQ hotel, linked by an open public plaza, promoting a constant pedestrian flow near and around the site. An inviting public café is among the amenities on the ground level not only for Marriott associates but also for Bethesda residents and visitors. Flanking the plaza on the other side is a vibrant restaurant and bar at the base of the hotel. Both venues have large glass doors that open to the plaza, creating an inside-out community engagement experience.

The first five floors of the building are all amenity-driven. An inviting, high-end dining hall on the second floor is a popular congregation area, with terraces for dining al fresco. Continuing with a theme of hospitality, a full-service café and coworking area connect to the lobby for associates and guests.

Level three features a state-of-the-art fitness facility, a health and wellness center, and a secure childcare center for associates’ children with an all-weather, covered outdoor playground. Lactation spaces, meditation rooms, treadmill desks and massage chairs are among the other carefully curated offerings. In return, Marriott’s HQ has earned a Fitwel 3-star global rating — the highest available.

Amenities are dispersed vertically to create constant movement through the building. Rather than give over the top floor to executives like a traditional headquarters, the top floor here is dedicated to associate learning and development. The J.W. Marriott, Jr. Associate Growth Center hosts a multitude of experiences – both live and virtual to enable participation by the company’s global workforce – including leadership development programs, skill development curriculum, featured speakers, new hire orientation, and networking events. One floor below, a large outdoor terrace acts like an elevated park and frames outstanding views and features groves of river birch trees native to Maryland.

Concepts for the dynamic new workplace are centered on associate comfort, engagement, and connection. To help achieve the goal of associate engagement, the design provides opportunities for associates to customize their own environments, like sit-stand desks that adjust at the push of a button, supporting work-life balance and well-being.

As a byproduct of hybrid work, the office makes use of fluid workstations with shared spaces and amenities to promote transparency and collaboration. Digital resources are woven throughout, enabling virtual agility and a diversity of choice in work style. One floor is devoted to Marriott’s Design Lab, which is co-located with a test kitchen and bar space, design library, and a large interactive meeting area for experimentation.

Rather than have a dedicated auditorium that takes up real estate and isn’t regularly used, the open and active atmosphere of the atrium doubles as a gathering place for large company meetings and includes unique coworking spaces, with a composition of banquettes, conference and team rooms, and a feature staircase joining each level. More than 1,000 people can gather along the atrium balcony edges and the wide amphitheater-like staircase for company meetings and celebrations. A large cafeteria — aptly named the Hot Shoppe, paying homage to the company’s first restaurant’s name — sits at the top of the atrium and further activates the space.

Linked with the entry sequence adjacent to the outdoor plaza, the atrium features a spectacular custom lighting pendant inspired by the topographic renditions of destination landscapes. In a manner both inspiring and informative, the space showcases the breadth of the Marriott portfolio of brands. A massive 25’ x 65’ curved LED media screen shows dynamic video clips from amazing travel destinations around the world, capturing the spirit and adventure of travel without being too literal.

Around the corner and in contrast to the contemporary video wall, a dynamic, 12-foot-tall display brings the company’s rich history to life. The “Cabinet of Curiosity” houses a curated collection of items from Marriott’s past and present, from a model of the “follow-me” bicycle from the drive-in check-in at the company’s first hotel, to front desk bells and keycards from properties around the world.

A replica of the Model T Ford that cofounders J. Willard and Alice S. Marriott drove from Utah to Washington, D.C. to open the nine-seat root beer stand that marked the company’s founding, can be seen on the other side of the atrium.

The future of work, embodied.

As one rises through the tower, the luxurious interiors never lose sight of the local context and the Marriott brand. The campus ultimately acts as a showcase of Marriott’s commitment to regional transformation, family roots, and a world-class travel experience — all while epitomizing the concept of healthy, engaging work-life integration. In fact, the campus was just named “Best New Office We Want to Work at” in Bethesda Magazine for creating “a workplace that’s thoughtful and welcoming.”

In many ways, the findings of Gensler’s 2022 U.S. Workplace Survey should be read as a call to action for employers on the front lines of defining the future of work and the future of cities. With the fates of each increasingly intertwined, the last thing anyone should do is take engagement for granted. Marriott has demonstrated one way of prioritizing associate engagement in delivering a campus that connects its global workforce, enables innovation, and positions the company for the future.

Boston Properties and The Bernstein Companies jointly developed and own the campus, which will be leased exclusively to Marriott International. JLL served as project manager, and the project was built by Rand Construction. 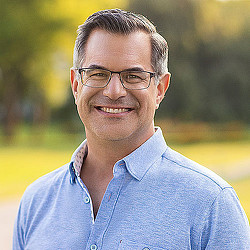 Full Bio All Posts
Jordan Goldstein
Jordan is Co-Firm Managing Principal, overseeing design innovation and project delivery for the firm. Throughout his career he has led the design of more than 8 million square feet of commercial projects in the U.S. and abroad. Jordan is based in Washington, D.C. Contact him at . 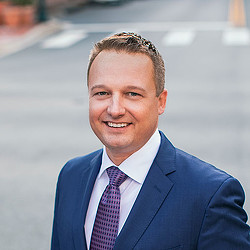 All Posts
Ty Breland
Ty is Executive Vice President and Chief Human Resources Officer for Marriott International, Inc., the world’s largest hotel company with nearly 600,000 associates across 7,900 properties and corporate offices. As the company’s senior human resources executive, Ty is responsible for creating a unique, world-class employment experience for Marriott while ensuring the company attracts and develops best-in-class talent to serve members and guests around the world.
Want more of Gensler’s design insights?
Sign up for our dialogue newsletters to get regular
updates sent directly to your inbox.
Follow us on Social Media