In response to the current pandemic, people around the world have adapted to working in the virtual realm. No one was better suited to quickly pivot to this “new normal” than tech companies. Due to the nature of their work, many tech companies were already well equipped to work remotely, and over the past several months they’ve proven that they can do so effectively.

In fact, tech companies have been so efficient at working and collaborating via digital platforms that many are starting to reevaluate their real estate portfolios and rethink their approach to office space. One idea that is rapidly gaining traction with commercial real estate investors is the “hub-and-spoke” model, in which companies are looking to move away from a single centralized headquarters in favor of multiple, smaller satellite offices that are strategically located in new and emerging markets.

Prior to COVID-19, several tech companies had already started to discuss the idea of moving to a more distributed workforce that encouraged remote working. New tax laws, rising rents, and an increasing demand to attract and retain top talent were all factors that had CFO’s questioning their Bay Area leases. We are now seeing companies like Twitter and Facebook announce that they are considering a future where working from home becomes a long-term part of the company culture. Facebook, for example, recently announced that it will be setting up new offices in Atlanta, Dallas, and Denver and is estimating that over the course of the next decade, half of the company could be working remotely full time.

While the hub-and-spoke model isn’t necessarily new, the pandemic has acted as a catalyst for companies to rethink their space and operational needs. Below are just a few key considerations that tech companies might want to take into account as they move forward with assessing their real estate portfolio.

Transform existing headquarters into “hubs” focused on meeting and collaboration.

One thing we have learned from working remotely is that people miss connecting with colleagues in person. What if tech companies revised the way they used their existing headquarters to focus on strengthening employee relationships? For example, the company off-site that happens once a quarter at some remote destination could now become the “on-site,” where internal teams spread across various offices and remote working platforms could come together at the “Hub” to meet and collaborate. These existing headquarters could continue to function as office space for employees who live in the immediate area, but a bulk of the square footage could be transformed into programs that support large events and focus on reinforcing the company’s culture.

Open up in-house amenities to the surrounding community.

Technology companies often incorporate specialized program into their office spaces to help differentiate themselves within the market and gain a competitive edge when trying to attract top talent. What if tech companies reworked their security systems to allow these amenities to be accessible to the public?

Full commercial kitchens, speakeasy bars, in-house gyms, wellness suites, and all-hands spaces with grand stadium stairs are just a few of the types of spaces that groups and businesses in the surrounding community could put to good use. For example, could a struggling restaurant that lost their brick-and-mortar location due to the economic recession take up residence in a tech company’s commercial kitchen? Or could a local yoga studio rent out the in-house gym to host classes for internal employees, as well as other neighborhood residents? And could the all-hands space be opened up to schools, youth programs, and community organizations, allowing them to host events and gain access to a robust AV infrastructure? These are just a few of the programs tech companies might consider to rethink the way they use their in-house amenities to reach beyond their own employees and support the surrounding community.

Overall, workers expect to return to the office at some point, but what if there is no longer an office to go back to? Unfortunately, many small-scale start-ups have been impacted by the economic recession that has followed in the wake of the COVID-19 pandemic. Some companies have had to terminate their leases to stay afloat and are left wondering how to move forward. One idea that could address some of these issues would be for larger tech companies to explore the idea of providing internal incubation or coworking spaces at subsidized rates for companies that are getting back on their feet. This could prove to be a mutually beneficial relationship. Small scale start-ups would gain access to a physical space to work and could tap into an existing workplace infrastructure (i.e., meeting rooms, AV/IT technology, etc.), while the larger tech companies could monetize under-utilized real estate, establish connections, and curate a series of “tenants” that are working to develop IP that could support their larger business model.

Now that tech companies have proven that they can effectively work from home, I believe we will see a rise in smaller satellite offices based in regional communities. These “spoke” workplaces will be locations where employees can connect on a regular basis outside the “hub.” Strategically integrated into the suburbs of major metropolitan areas, these satellite offices could be located in a variety of spaces and designed at various scales making up a larger, more flexible corporate ecosystem. By expanding into secondary markets, tech companies can help to significantly reduce employees’ commutes and improve their work/life balance, which in turn has proven to lead to increased productivity and higher employee retention rates.

Tech employees aren’t the only ones that could benefit from satellite offices; the companies themselves have a lot to gain as well. Leasing out smaller spaces in geographically dispersed locations will help to diversify their real estate portfolios, making companies more nimble and allowing them to quickly respond to economic shifts.

By expanding into regional communities, tech companies have an opportunity to contribute to the economies where their employees live. When Zendesk moved into San Francisco’s mid-Market neighborhood, Zendesk made it a priority to give back to the local community. Instead of providing an in-house meal program for staff, the company gave employees meal vouchers that could be used at restaurants in the area to support local business. Now imagine this same approach, but deployed in multiple neighborhoods at the same time broadening the opportunity for community impact.

Extending this idea even further, tech companies could leverage their presence in these secondary markets to help facilitate conversations and initiate dialogue with local residents to reinforce and reaffirm their commitment to social change, which in turn could amplify their mission across a larger network of people.

Many of these immediate, short-term shifts will have long-term impacts. As tech companies explore a decentralized approach to the workplace, the hub-and-spoke real estate model may allow them to adapt and prepare for an uncertain future. While it’s unclear whether remote working will be permanent, one thing we’ve learned from this pandemic is that the future workplace must be more flexible, dynamic, and responsive than ever before. 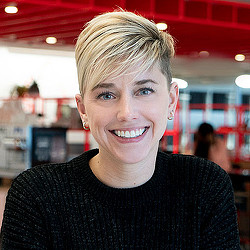 All Posts
Sarah Brengarth
Sarah is a design director and strategic thinker with a passion for designing authentic and meaningful spaces for her clients. With a background in architecture, she prides herself on approaching projects holistically. Sarah is based in Oakland. Contact her at .
Want more of Gensler’s design insights?
Sign up for our dialogue newsletters to get regular
updates sent directly to your inbox.
Follow us on Social Media