Central Business Districts (CBDs) are at a crossroads. As companies and cities navigate uncertainty due to the adoption of hybrid work models brought on by the pandemic, today’s CBDs must become environments and workspaces that are diverse, more inclusive, and healthier. For CBDs to thrive, our business, civic, institutional, and recreational spaces must be open and welcoming to everyone, at all times of the day. By creating an immersive, mixed-use destination for residents, workers, and visitors, the AT&T Discovery District has successfully reimagined the company’s headquarters as a magnetic new public space, while breathing new life into Dallas’ downtown core.

According to the Gensler Research Institute’s City Pulse Survey 2021, which captures people’s changing attitudes during this time, many of those surveyed were already contemplating leaving large global cities even before the pandemic hit, mostly due to affordability concerns. These findings have implications for workplace, mobility, retail, culture, and entertainment, which means considerable consequences for the future of CBDs.

For CBDs to have a bright future, planning and development projects should embrace the 20-minute city concept, in which neighborhoods are designed with diverse commercial, residential, and institutional needs within a 20-minute walk or bike ride of each other. This proximity energizes and revitalizes the city in a connected and equitable manner.

We believe CBDs must be designed to be more appealing, hospitality-oriented destinations that are more 24/7 and less 9-to-5. Parks, outdoor areas, and greenspaces should be implemented to promote health and wellness, and new kinds of engaging venues and entertainment options must emerge to serve a broader population beyond the business working hours of a typical day.

To see this approach in action, look no further than the AT&T Discovery District. In partnership with AT&T, the goal was to design a new, trend-setting strategy for corporations to leverage their presence in CBDs to anchor and invigorate communities around them. The result is the total transformation of a corporate campus in an otherwise inactive area of Dallas’ CBD into one of the most popular, innovative, and experiential places in North Texas.

A catalytic change to the Central Business District

AT&T has called downtown Dallas home since 2008, which is a big reason why they decided to remain there and invest in the District as a place for both employees and the public to enjoy.

After holding strategic visioning sessions with the client, the design team began developing the District’s programming with a combination of architecture, design, and digital experience elements that offer an immersive, engaging experience, creating an entirely new landmark for the city and its people.

Throughout the years of planning, project collaborators involved the Dallas City Council, planning committee, as well as neighborhood businesses and residents in the design approval process.

The presence of the District is also providing opportunities with neighboring hotels and retailers, including the recently opened Pegasus City Brewery, which is next door. Since the District opened this summer, it has welcomed thousands of visitors per day.

The District establishes a new norm for bringing the community together in a variety of previously unavailable open spaces, while orchestrating never-before-seen, immersive media experiences. One of the main driving concepts behind the vision is blurring the boundaries between the private and public sectors, as well as the physical and digital realms.

Programmatically, and by understanding the need to diversify workplace modes and amenities, the campus was infused with an assorted lineup of retail and dining facilities, as well as open outdoor spaces that host employees during the day and community gatherings at night — activating the space from day-to-night.

Architecturally, kinetic lighting and media capabilities were seamlessly embedded into various built platforms offering various simultaneous realities for the same space and creating an atmosphere akin to experiencing the multiverse. Standing in the middle of the District, one can distinctly feel the power of connection through the coordinated looping media visuals on contiguous vertical and horizontal surfaces.

Our design team knitted together an area of incongruent buildings with the introduction of two twin superstructure media trellises, creating a visual connection and signaling the presence of the plaza to vehicular and pedestrian traffic. A 6K resolution media wall standing 104-feet tall by 84-feet wide was also perfectly placed at the terminus of a main street spanning five city blocks, giving the District presence on a macroscale.

As guests approach the site, the media wall fades behind a grove of trees — an outdoor collaborative space for AT&T employees during the day — that conveniently turns into a destination space for visitors to enjoy free WiFi and 5G connectivity. Camouflaged behind the tree canopies sits The Globe, a 30-foot interactive, rotating sphere that engages different areas of the plaza depending on the need. Serving as the centerpiece of the plaza, The Globe, combined with the trellises, ground lights, and media screens, engages the public in a unique immersive digital experience.

As we emerge from the pandemic one thing is for certain: more of our work and recreational lives will blend, even occurring outdoors, and CBDs should be redesigned accordingly. The AT&T Discovery District has successfully reactivated the CBD by creating a welcoming, experience-rich environment that fosters ongoing connection and engagement. By highlighting the importance of outdoor work areas, as well as the importance of free technology and safe outdoor space as an extended third place for downtown visitors, the District sets an example for other companies and cities to revive and foster new growth in the urban core. 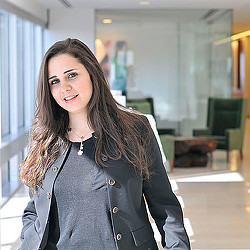 All Posts
Dana Hamdan
Dana is a designer in Gensler's Dallas office who served as design manager for the AT&T Discovery District. She works closely with clients and project teams to formulate design concepts and make client presentations. Dana has played an integral role in coordinating project requirements and design criteria, helping advance critical design decisions in support of rapidly moving schedules. Contact her at .
Want more of Gensler’s design insights?
Sign up for our dialogue newsletters to get regular
updates sent directly to your inbox.
Follow us on Social Media