Glance at the south side of the 100-story John Hancock Center through binoculars and you might see a section of windows on the 94th floor separate from the façade, the people inside tipping forward. That’s Tilt, a big draw at 360 Chicago, the former observatory floor recast by tourist-attraction operator Montparnasse 56. Tilt is a 26-foot-wide steel-and-glass box, engineered by Thornton Tomasetti. Three hydraulic actuators rotate it outward so eight people can experience Chicago from 1,000 feet up—leaning out over it at the daredevil angle of 30 degrees.

“To provide the thrill, we came up with the angle at which your center of gravity tells you that you can’t stand up—but not so far that it’s uncomfortable,” says Eric J. Deutsch, vice president and head of operations at Montparnasse 56 USA. Normal mortals can lean forward about 22 to 24 degrees and still recover themselves. Tilt riders don’t reach the 45 degrees that the King of Pop could lean in his patented antigravity shoes, but 30 degrees is plenty when you’re high, high up. Those 75 seconds of tilt concentrate the mind. “People feel like, ‘Oh my gosh, I’m past the point of no return! I need help!’” says Gensler’s Michael Gatti, whose team designed the Tilt visitor experience on the concourse level and renovated the 94th floor to complement Thornton Tomasetti and Montparnasse 56’s installation of Tilt. More upgrades are on the way at the end of the year, including a final touch-up of the concourse and revamped concessions at the observation deck, with expanded seating and new wood finishes.

Tilt itself is the main photo op—many visitors take pictures and videos the whole time they’re inside, says Gatti—but Gensler’s remodel of the 360 Chicago interiors added another highly Instagrammable flourish. The architects lightened up the 94th floor’s low, dark ceiling by installing stretched ceiling panels around the perimeter. Its mirror finish reflects the windows and sky, creating the illusion of a double-height space. “Visitors are taking really interesting photographs of their friends’ reflections and Lake Michigan beyond them,” says Gatti. “They get these amazing angles that make people ask, ‘How did you manage to get that picture?’” 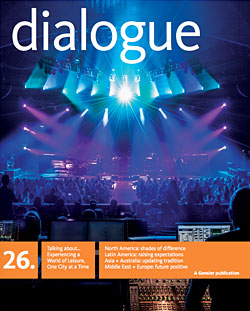